This website uses cookies and similar technologies. By clicking on "I agree", you accept this processing and also the transfer of your data to third parties. The data is used for analysis, retargeting and to display personalized content and advertising on the BVS Industrie-Elektronik GmbH website and on third-party websites. Technically necessary cookies are also set when you select reject. Further information, including data processing by third-party providers, can be found in the settings and in our data protection information. You can manage the use of cookies at any time via the data settings.

We store the products from your shopping cart here, if you could not finish your checkout. On your next visit, all your products are still in your shopping cart.
We remember your personal settings here so that you do not have to make them again every time you visit - e.g. category selection, audio and video volume, list display and position, permanent hiding of information that you have already taken note of, etc.
Here we save which language, which country and which currency you prefer to use to browse our shop.
We use Google Analytics to better understand the use of the shop. Google Analytics uses the information collected for BVS Industrie-Elektronik GmbH to evaluate the use of the shop, to compile reports for shop activities and to provide BVS Industrie-Elektronik GmbH as the website operator with other services related to shop and internet usage. No personal data is transmitted to Google and the data is stored anonymously by Google.
We use Google Adwords on our website. With Google Adwords (Conversion Tracking), we and Google can recognize which ad a user clicked on and which page they were redirected to. The information obtained with the help of the cookies is used to generate statistics for AdWords customers who use conversion tracking. These statistics tell us the total number of users who clicked on the ad placed by Google and were redirected to a website with a conversion tracking tag.
Facebook remarketing enables us to target our users with advertising who are already interested in our shop and our products. During retargeting, the advertising material is displayed on the basis of a cookie-based analysis of previous user behavior.
We at BVS Industrie-Elektronik GmbH use products and services for analysis and marketing purposes that are made available by Visable GmbH (www.visable.com) in cooperation with them. For this purpose, the collection, processing and storage of data is carried out by means of counting pixel technology in order to create at least pseudonymized and, where possible and sensible, completely anonymized usage profiles.

Alternatively you can disallow the usage of cookies and dismiss the cookie banner permanently by clicking on deactivate.

Our entire offer applies only to industry, trade & craft. All prices without VAT.

Repair and service for SMA inverters

As a leading global specialist in photovoltaic system technology, SMA inverters create the prerequisites for the decentralized, digital and renewable energy supply of tomorrow. For over 35 years, SMA has been setting technological trends and driving the development of renewable energies. Photovoltaics and inverters from the Sunny Boy, Sunny Tripower, Sunny Mini Central and Sunny Central product families play an important role in the digitalization of the energy industry.

By repairing SMA inverters, we not only identify malfunctions, problems and error messages with SMA inverters, but also remedy them in the form of a complete product overhaul of your SMA photovoltaic inverter. The technical expertise and service competence of our company is based on decades of repair experience in the field of maintenance of industrial electronics, in which BVS Industrie-Elektronik GmbH is one of the industry leaders.

Comprehensive services for SMA inverters with a 24-month warranty*

The product overhaul and repair of SMA solar inverters provides that not only defective components are exchanged or repaired, but the entire inverter is subjected to a comprehensive product overhaul. You send us your defective SMA inverter and receive it back in an overhauled condition.

You can inquire about all BVS services directly and without obligation via our BVS online shop - our team will then get back to you as soon as possible and make you an offer. You receive a 24-month warranty* for the services mentioned. We look forward to working with you. If you have any questions, we are available around the clock at +49 6181 95404-200. 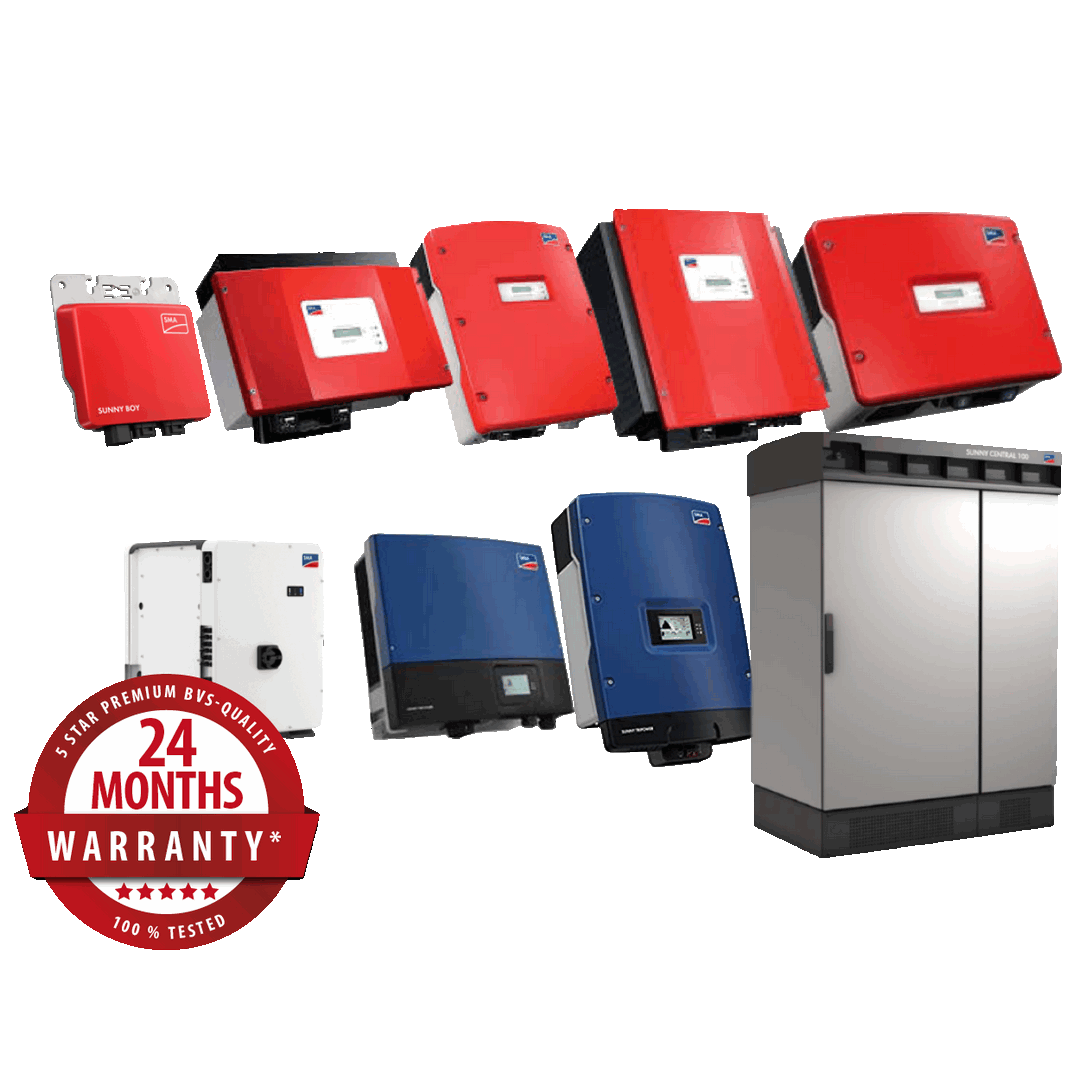